VMware vSphere Metro Storage Cluster is a suite of infrastructure configurations that facilitate a stretched cluster setup. It’s not a feature like HA/DRS that we can switch on easily; it requires architectural design decisions that specifically contribute to this configuration. The foundation of which are stretched clusters and with regards to the Compellent suite of solutions Live Volume

Having stretched clusters gives us greater flexibility and potentially better RPO/RTO with mission critical workloads when implemented correctly. Risk and performance are spread across one location. Failover scenarios can be further enhanced with automatic fail over features that come with solutions like Compellent Live Volume.

From a networking perspective. Ideally we have a stretched & trunked layer 2 network across both sites facilitated by redundant connections. I will touch on requirements later on in this post.

What is Live Volume?

Live volume is a specific feature with Dell Compellent storage centers. Broadly speaking  Live Volume virtualizes the volume presentation separating it from disk and RAID groups within each storage system. This virtualization enables decoupling of the volume presentation to the host from its physical location on a particular storage array. As a result, promoting the secondary storage array to primary status is transparent to the hosts, and can be done automatically with auto-failover. Why is this important for vMSC? Because in certain failure scenarios we can fail over between both sites automatically and gracefully. 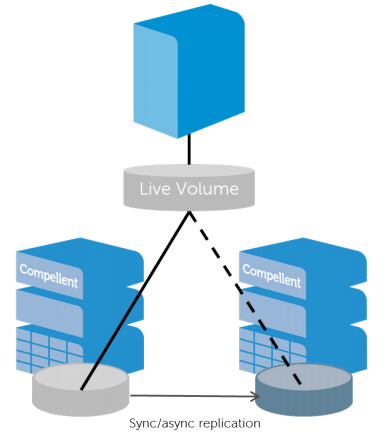 Specifically regarding the Dell Compellent solution:

For vMSC we have two options for presenting our storage. Uniform and Non uniform. Below is a diagram depicting a traditional uniform configuration. Uniform configurations are commonly reffered to as “mesh” typologies, because of how the compute layer has access to primary and secondary storage both locally and via the inter-site link. 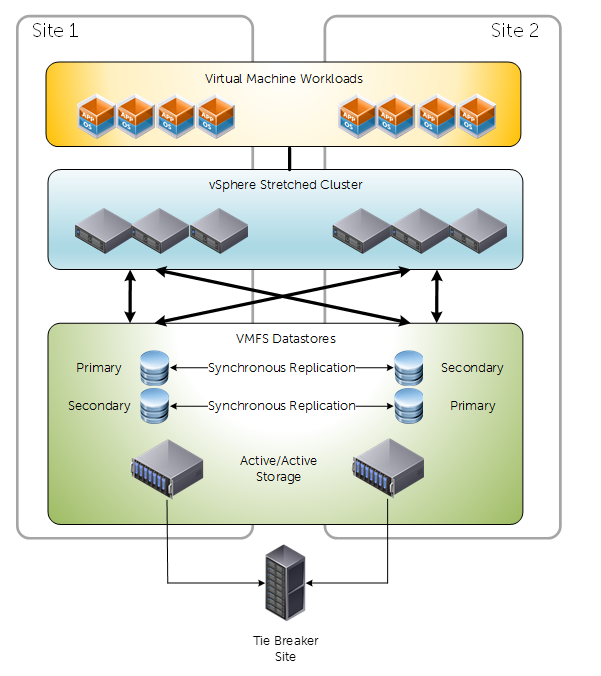 Non-Uniform presentation restricts primary volume access to the confines of the local site. Key differences and observations are around how vCenter/ESXi will react to certain failure scenarios. It could be argued that non-uniform presentation isn’t as resilient as uniform, but this depends on the implementation.

With Dell Compellent storage centers we have two methods of achieving synchronous replication:

Most people tend to opt for High Availability mode for flexibility, unless they have some specific internal or external regulatory requirements.

Short answer, yes. Long answer, it depends on the storage vendor, but as this is a Compellent-Centric post I wanted to discuss a (really cool) feature that can potentially alleviate some headaches. It doesn’t absolve all HA/DRS considerations, because these are still valid design factors. 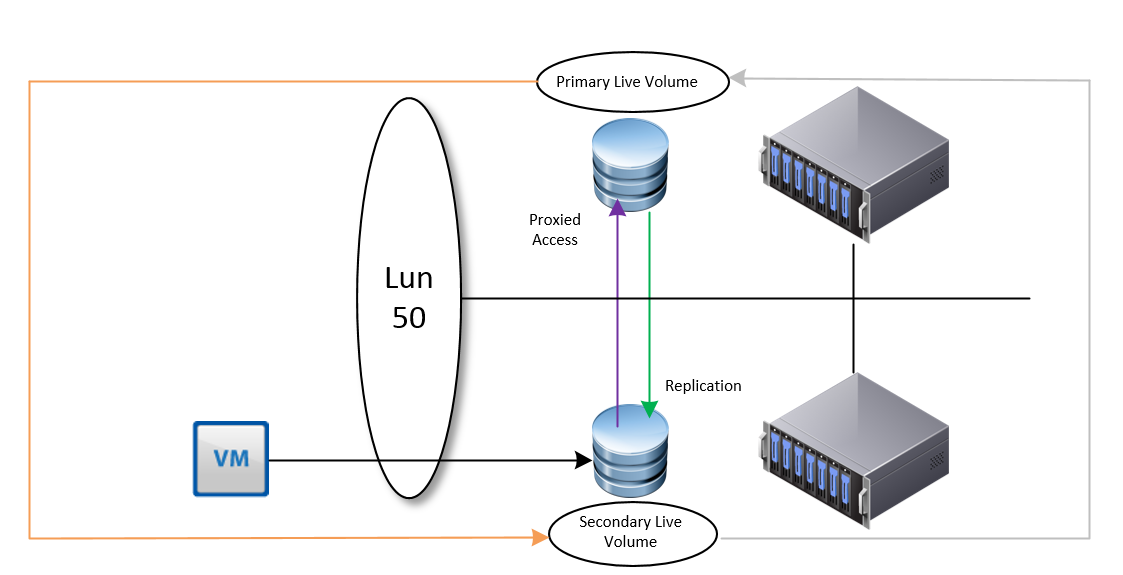 In this example we have a Live Volume configured on two SAN’s leveraging Synchronous replication in a uniform presentation.

If, for any reason a VM is migrated to the second site where the secondary volume resides, we will observe IO requests proxied over to the storage center that currently has the primary live volume.

However, Live volume is intelligent enough to identify this, and under these conditions will perform a automatic role swap, in an attempt to make all IO as efficient as possible.

I really like this feature, but it will only be efficient if a VM has its own volume, or VM’s that reside on one volume are grouped together. If Live Volume sees IO from both sites to the same Live Volume, then it will not perform a role swap. Prior to this feature, and under different design considerations we would need to leverage DRS affinity rules (should, not must) for optimal placement of VM’s for the shortest path of IO.

Other considerations include, but not limited to:

Why we need a third site

Live volume can work without a third site, but you won’t get automatic failover. It’s integral for establishing quorum during unplanned outages and for preventing split brain conditions during networking partitioning. With Compellent, we just need to install the Enterprise Manager on a third site that has connectivity to both storage centers, <200ms latency and it can be a physical or virtual Windows machine.

As you can imagine a lot of care and attention is required when designing and implementing a vMSC solution. Compellent has some very useful features to facilitate it, and with advancements in network technology there is a growing trend for stretched clusters for many reasons.