In this multi-part series, we evaluate the options available to vSphere users/customers wishing to deploy a native container service into an existing vSphere environment.

Why should we care about containers?

Containers change the way we fundamentally look at application deployment and development. There was a huge shift in the way we managed platforms when server virtualisation came around – all of a sudden we had greater levels of flexibility, elasticity and redundancy compared to physical implementations. Consequently, the way in which applications were developed and deployed changed. And here we are again, with the next step of innovation using technology that is making rifts in the industry, changing the way consume resources.

VIC (or vSphere Integrated Containers) is a native extension to the vSphere platform that facilitates container technology, because of this tight integration we’re able to perform actions and activities using the vSphere client and integrate it with auxiliary services. VIC is developed in such a way so it presents a Docker Compatible API endpoint. Therefore Ops/Dev staff already familiar with Docker can leverage VIC using the same tools/commands that they’re already familiar with.

VIC is a culmination of three technologies:

The containers engine is the core runtime technology that facilitates containerised applications in a vSphere environment. As previously mentioned, this engine presents a Docker-compatible API for consumption. Tight integration between this and vSphere enables vSphere admins to manage container and VM workloads in a consistent way.

Harbour is an enterprise-level facilitator of Docker-based image retrieval and distribution. It’s considered an extension of the open source Docker Distribution by adding features and constructs that are beneficial to the enterprise including but not limited to : LDAP support, Role-based access control, GUI control and much more.

Admiral is a scalable and lightweight container management platform for managing containers and associated applications. Primary responsibilities are mainly around automated deployment and lifecycle management of containers.

The management plane of VIC is facilitated by a OVA appliance, rather than going through the installation steps here, I will simply point to the direction of the (excellent) documentation located at https://vmware.github.io/vic-product/#documentation. At the core though, we have the following constructs: 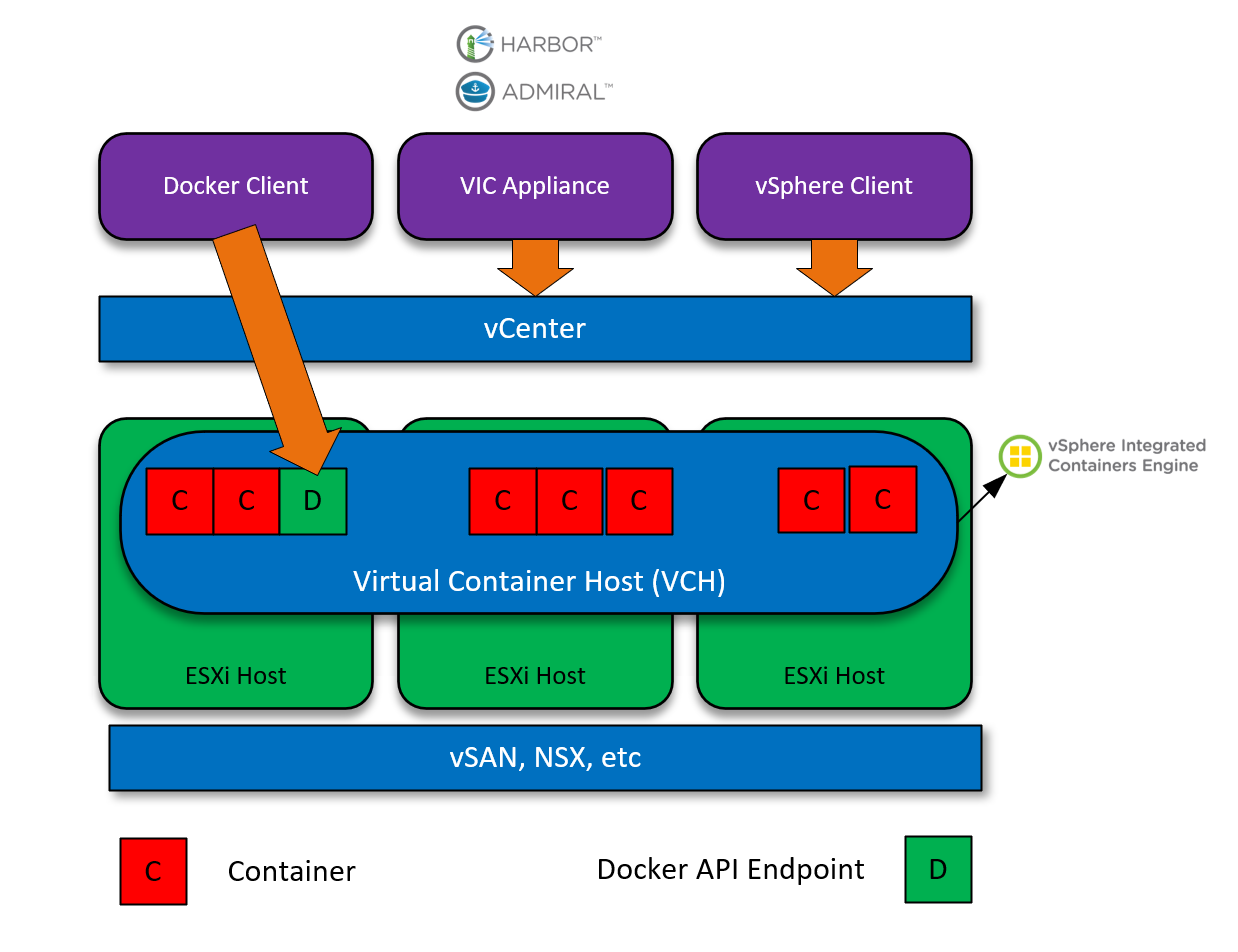 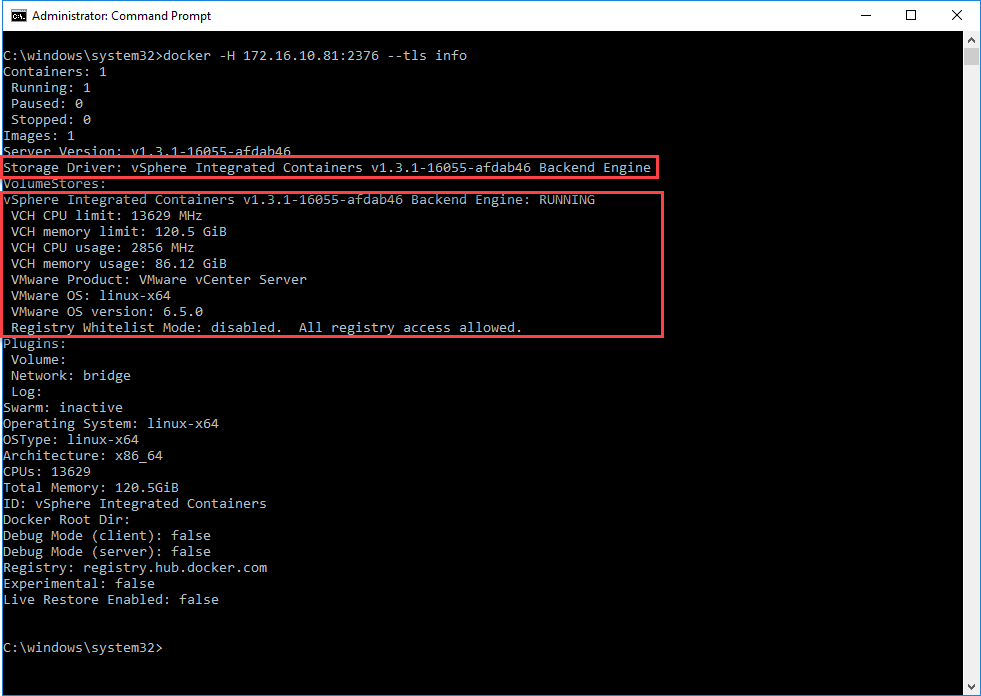 So why would any of us consider VIC instead of, for example, standard Docker hosts? Here are a few points I’ve come across:

VIC helps bridge the gap between Developers and Administrators when it comes to the world of containers. I would say VIC is still in its infancy in terms of development, but it’s being backed by a great team and I think it’s going to make a compelling option for vSphere customers/users looking to embrace the container world, whilst maintaining a predictable, consistent security and management model.

Log analysis has always been a standardised practice for activities such as root cause analysis or advanced troubleshooting. However, ingesting and analysing these logs from different devices, types, locations and formats can be a challenge. In this post, we have a look at vRealize Log Insight and what it can deliver.

vRealize Log Insight is a product in the vRealize suite specifically designed for heterogeneous and scalable log management across physical, virtual and cloud-based environments. It is designed to be agnostic across what it can ingest logs from and is therefore valid candidate in a lot of deployments.

Additionally, any customer with a vCenter Server Standard or above license is entitled to a free 25 OSI pack. OSI is known as “Operating System Instance” and is broadly defined as a managed entity which is capable of generating logs. For example, a 25 OSI pack license can be used to cover a vCenter server, a number of ESXi hosts and other devices covered either natively or via VMware Content Packs (with the exception of Custom and 3rd party content packs – standalone vRealize Log Insight is required for this feature). 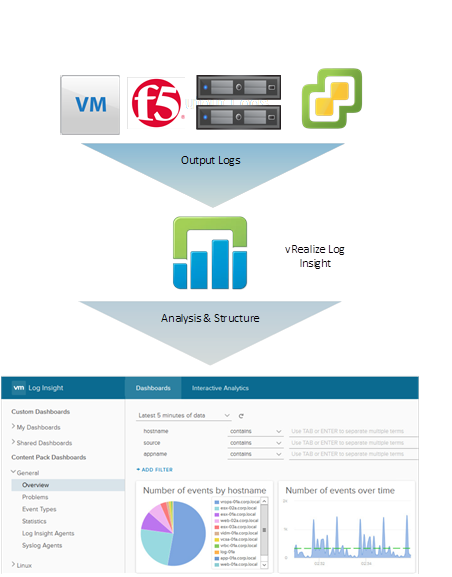 Modern datacenters and cloud environments are rarely consumed by homogeneous solutions. Customers use a number of different technologies from different vendors and operating systems. With this comes a number of challenges:

Below are examples of how vRealize Log Insight can address the aforementioned challenges.

Content packs are published either by VMware directly or from vendors to support their own devices/solutions. Examples include:

It’s surprising how underused vRealize Log Insight is considering it comes bundled in as part of any valid vSphere Standard or above license. The modular design of the solution allowing third-party content packs adds a massive degree of flexibility which is not common amongst other centralised logging tools. 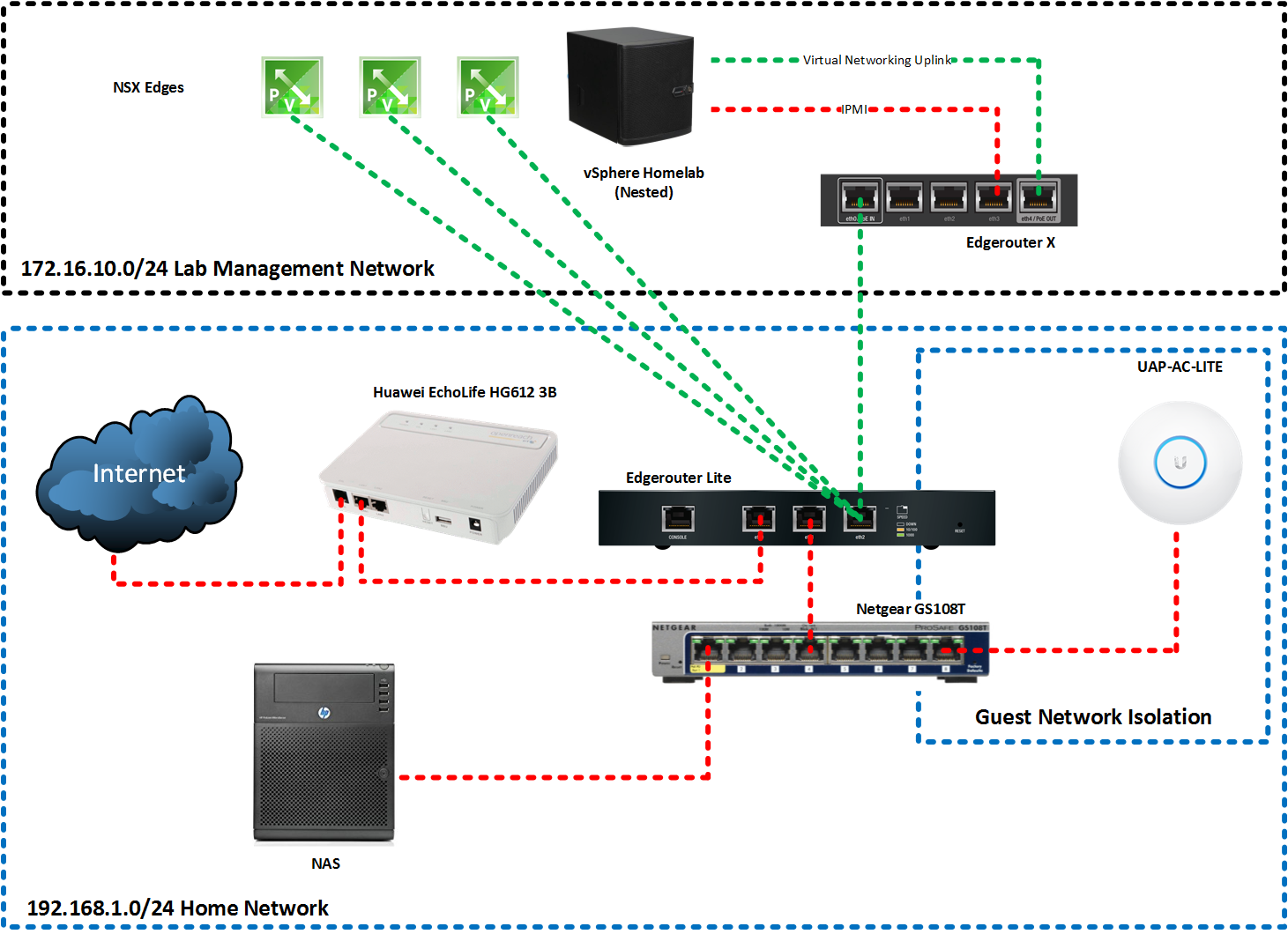